How to go electric and save even more money

Since buying his first electric car in 2014, Martin Roberts has seen the positive impact on his bank balance  – and he’d never go back. He also has some great words of advice for people who are thinking about making the switch.

With a round trip to work of around 75 miles a day from Port Talbot to Cardiff, Martin’s fuel bill was huge – and rising. When his car developed a fault, he was stuck without a car for a fortnight. After seeing a Twitter advert for a Nissan LEAF advertising 2p a mile, he got one on loan and gave it a go.

Even in those early days, the battery had no problem with his commute. Martin was sold. He took out a PCP contract on a 24kWh Nissan LEAF, and never looked back.

‘It took me a little while to get used to it,’ said Martin. ‘I was a bit heavy footed at first, which did run the charge down a bit more quickly. But once I got the hang of it, I was off.’

And charging was no problem either. ‘In those days, service stations even offered free rapid charging, so it was great,’ said Martin. ‘But I got a home charger right away, too. There are lots more rapid chargers appearing now, though you do have to pay. It also helps that chargers are starting to move to contactless payments.’ 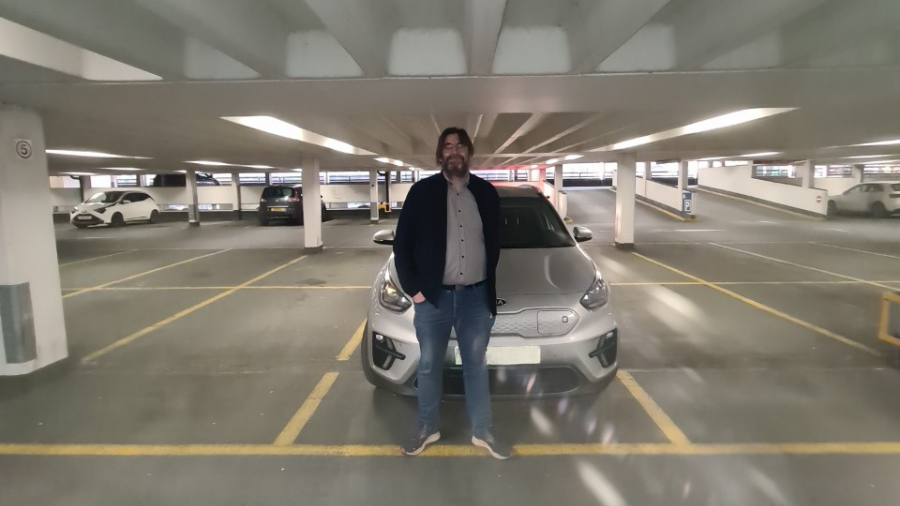 In the six years he owned the Nissan LEAF, Martin drove 103,000 miles, and saved a fortune in fuel and maintenance.

‘In all those years, the battery only degraded very slightly. After 83,000 miles, I lost one health bar on the battery – but I still had no problem with my commute. And at 85,000 miles I had to change the brake pads and disks. That was it!’

Martin then upgraded to a 64kWh Kia e-Niro, purely for the extra range. He also moved electricity supplier and got a smart charger, which he highly recommends.

‘Changing energy supplier meant I could take advantage of cheaper overnight rates. It’s also cleaner energy, which is always a good thing. I can now program the car to charge when it’s cheaper. I tend to charge every three days or so, and that keeps me well topped up.

"In the summer, it costs me about £1 for each commute. In the winter, it’s more like around £1.20-£1.50. Driving style can definitely affect charge and I love playing around to see what I can get – I managed to get 99% economy the other day!"(Martin Roberts, 2022)

Martin’s next tip – don’t go by the ‘guessimeter’. ‘Always look at the battery charger rather than the distance provided by the car. It’s much more reliable. You get familiar with it after a while.’

Last up, Martin says, ‘Arrange a test drive. Check out all the different features and modes so you get a feel for it. Also, speak to someone who has one. A colleague was thinking about getting a hybrid recently, but I persuaded her to go fully electric. I sent her a long email explaining all the different opinions, costs and chargers. And she’s now ordered an electric car. I’ve challenged her to get 99% economy!’

Systems Specialist Martin Roberts was one of the first to make the switch to electric cars. He’s keen to spread the word and share great advice and knowledge with friends, colleagues and neighbours to help bring everyone on board.