ElectriX was proud to be headline sponsor of Fully Charged LIVE alongside LV= General Insurance. In its fourth year, it is THE event for anyone interested in electric cars and clean tech. Hosted by Robert Llewellyn, visitor numbers far exceeded the anticipated 20,000 visitors across the three-day show at Farnborough International. Rumour has it that they hit the 24,000 mark. The event was our opportunity to introduce ElectriX to the world.

The inside hall at Farnborough is immense. The ElectriX stand towered above the others, visible from afar. Located right next to the Giga Theatre where many of the panel sessions were held, we were in prime position to engage with people as they sauntered past. Our tote bags featuring Bev and Trev were a hit, and we were pleased with the number of people who scanned the QR code and downloaded their free Ultimate Electric Car Guide. For many now, the ElectriX customer journey has begun! 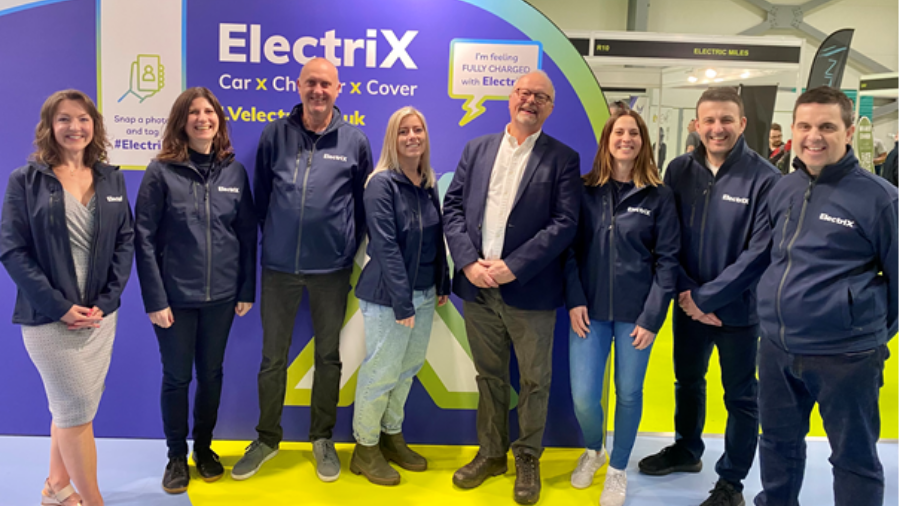 It was great to be able to introduce people to Indra, our smart home charging partner on the stand, and see the Indra Smart Home PRO charger in action. We were also pleased with the numbers of enquiries for LV= ElectriX electric car insurance. We also shared our stand with leasing company CBVC  (LV= ElectriX is CBVC’s preferred electric car insurance partner), which featured a beautifully wrapped Hyundai KONA.

It was a pleasure to take part in two panel sessions at Fully Charged LIVE. One of the sessions was hosted by Robert Llewellyn, in the esteemed company of Kate Tyrell, Sara Sloman and Tom Callow. ‘What the FUD and how to fight it’ saw us covering the usual concerns around cost (LV=’s total cost of ownership work through its Electric Car Cost Index plays a key role in combatting this particular issue), range and charging infrastructure. A show of hands from the audience told us that around 80% of them were EV curious – it’s really important for us to keep on providing reassurance and knowledge on electric cars. Most people are still new to the idea, and through our work on ElectriX we have an important role to play in nurturing them along the journey as we invite them to take the first steps into electric driving. On the FUD (fear, uncertainty and doubt) front, the next 12 months will see us continuing to reassure and support people as they begin to think about making the switch to an electric car. With only 1-2% of the total car parc in the UK being battery electric, we have a long way to go. Let’s not forget this.

Highlights on the stand came in the form of selfies with Robert Llewellyn (please form an orderly queue), and a visit from the Rt Hon Grant Shapps MP.

Watch this space for the Fully Charged PLUS ElectriX video soon to be released.

And for your Ultimate Electric Car Guide from Electrix, download it for free here.