Can you go electric without a home charger?

When Maz Shar passed his driving test, he wanted an electric car. But living in an apartment without any home charging, could he make it work?

'Before I even passed my driving test three years ago, I used to joke that I wanted my first car to be electric – it just felt like the right thing to do. But I lived in an apartment and didn’t have anywhere to charge an EV, so in the end I got a small manual petrol car. But the idea just wouldn’t go away...'

So you bought an EV without having a charging point? How does that work?

'Well, the apartment I was living in didn’t have any chargers in the car park, so I knew I’d have to be a bit more creative. I started by looking at how I used my car each week.

I was living in Worcester and commuting twenty minutes either way – this was before Covid. At the weekend I’d take longer trips, normally a 120-mile round trip which I knew would be fine with the cars I was looking at.

That just meant I needed to work out where to plug it in. The answer to that one was pretty simple: there was a rapid charger at work. So I got into a routine: one lunchtime a week I’d plug the car in at the start of my break, and unplug it at the end so I didn’t hog the charging point.

It worked really well right up until the first lockdown. With home-working, I couldn’t charge at the office. Instead I used my charger-finding app to work out what was local and started using one in a car park five minutes away, so it was easy to plug in and walk home. Now I’m living in Milton Keynes I’ve got even more choices: most of the time I use a charger at my local theatre.' 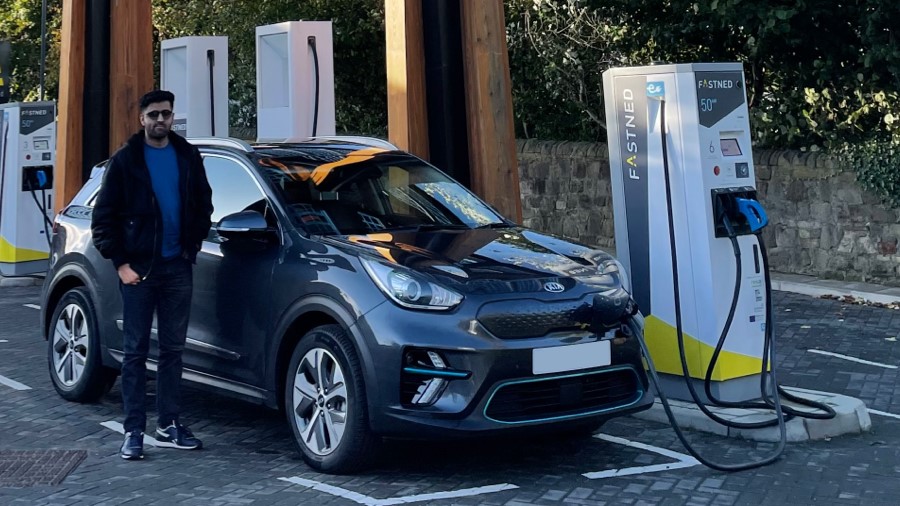 How do the costs stack up against your old car?

'When I was thinking about going electric, the first thing I did was calculate the costs. I worked out I was spending about £150 a month on my ten-year-old petrol car. When I knew that number, I started looking properly at EV leasing.

The gap wasn’t huge: I could get a Hyundai Ioniq for a bit more, but you’ve got to think of the hidden costs too – and for me, that means the long-term impact. My actions have a carbon impact on the future, and you’ve got to take that into account. I also really like that I’m not contributing to air pollution within my community.'

If someone’s thinking about going electric and is worried about charging, what advice would you give them?

"I think you just need to sit down and think about where you park for an hour or so. Are there chargers at the supermarket? The cinema? I often plug in for 40 minutes while I’m in the gym." (Maz Shar, 2022)

The other thing is that as more of my friends and family go electric, it’s easy to charge when you visit. Since I got my first EV, five different members of my family have made the change. It’s loads less hassle if someone lets you just plug in - and it makes visiting family much easier.'

As a robotics software engineer, Maz shares a keen interest in more intelligent and cleaner technology such as the electric cars that he's been driving since 2019. Interested in supporting others with the switch, Maz is a member of Electric Vehicle Association England which provides a voice for EV drivers.